Lime green and bright yellow, the Flamingo looked citrus to begin with. The ostentatious colours are aesthetically pleasing, loud but fashionable. The slight indent at the fore of the top tube is a neat touch to add detail to the HS-F6. One slight aesthetic oversight, though, became evident when I homed in on the Flamingo Crest at the front. It was hidden behind a silver reflector. Of course this aesthetic injustice can be easily undone by removing the obsequious reflector, but it did seem like a funny detail to overlook. Nit-picking aside, the HS-F6 did strike me as a beautiful bike. It exemplified the neatness of foldies and the utilitarian stoutness of a commuter bicycle.

Up to the point I picked the bike up, I never had the chance to try out a Flamingo. I was excited to see how different Taiwan-based bicycle products would be. The HS-F6 fit into the car boot with relative ease, although there was a minor snag with the brake levers brushing against the roof. It would have helped if the pedals could be folded in, as I had to realign the crank so that the bike would go low enough for me to close the boot. The claimed 78x40x59 cm folded dimensions did come across as slightly larger than other foldables, but I think the added volume is due mainly to the brake levers sticking out. The rubber catches that held the bike in the folded position were stiff, but I wonder if prolonged use could wear the rubber thin. We also all know what happens to rubber when left under the sun for long periods of time. It cracks. A quick check with My Bike Shop confirmed that they do carry plenty of rubber catches in case of them wearing out. Replacement of these due to wear and tear is free.

Assembling the bike was easy work, and I like the idea of using screw-in clamps to hold the joints. The clamps provide added stiffness for the aluminium frame. The only issue I had with the clamps was that they required me to use both hands to fasten: One to hold the metal clamp so that the joint fit the groove, and the other to turn the knob and tighten the screw. This was a bit tedious for me, and I imagine more so for the speed-obsessed cyclist. But once in place, the clamps were assuring fixtures that promised security even at high speeds.

Adjustable comfort… press plus or minus to find the sweet spot

The saddle struck me as an interesting gimmick because of the air-pump technology it boasts. There are 2 red buttons on the saddle, one with a plus sign, and the other with a minus. Basically, pressing the plus sign repeatedly would pump the saddle up with air. In all honesty though, I did not feel much of a difference riding a pumped up saddle. I removed the saddle cover to reveal a plastic base and a non-slip 3M material blanketing the air-pump technology. I saw the buttons and it occurred to me that while riding the bike, I would inevitably depress them with my sit bones. This saddle technology might be all air, but don’t get me wrong, it was still very comfortable to ride.

IGH and dual chainring gives you a wide range and reliability.

With Shimano Nexus in the rear hub, the HS-F6 is made to take bumps and still shift well. Easily jumping from gear 1 to 7, even while stationary, I was immediately bought over by the whole integrated hub concept of the Nexus. I am not familiar with Microshift shifters, but they worked well enough on the Flamingo. Shifting was smooth and quiet, even for the front derailleur. 14 speeds won’t make this bike a mountain climber, but for Singaporean hills, it will suffice. I scaled Siglap Hill with relative ease, and I began to appreciate one of the unique features of 16″ wheelers: The bike was highly manoeuvrable even uphill. Stationary shifting is a plus point for me, because riding the bike in urban environments would inevitably result in tight spaces. The HS-F6 was not built to break speed records, especially with its petite wheels, but I feel it would serve the average commuter well. At top speed the frame held up well, and again, I would draw reference to the clamps contributing to the stiffness of the ride. Thoughtful additions of stainless steel bolts at the stem contribute to the overall durability of the bike, making it somewhat weather-proof.

Shining A-M4 wheels provided good traction, with Kevlar threads giving some insurance against tire punctures. The tires are also double-walled for durability and protection. SRAM’s Avid V Brakes performed up to expectation, although I felt braking was just a bit too hard for comfort. Of course, an Allen key would easily fix things to suit individual preference. Despite how low the pedals were, I did not experience any heel scraping. The upright position that the flat handlebars facilitated would disappoint advocates of the aerodynamic arching of hoods, but to me the trade off is fair. The risk of heel scraping would increase for a more aggressive poise at such low stature.

The Flamingo HS-F6 is, to me, first a beautiful bike. Its practicality and neatness complement its simple fashion. Daring colour collocation and attention to detail captured me from the outset. At 11 kg it is neither the heaviest nor the lightest of the bunch, but a simple commuter bicycle it definitely is. I wouldn’t recommend this bicycle for the speed demons of Singapore, but the classic pragmatist would appreciate this Flamingo. Attention to durability makes the bike extremely attractive for non-technical riders, and to me this is a major selling point. Hydraulic press aluminium tubes constitute a sleek and elegant frame without short changing frame integrity and stiffness. Riding the Flamingo was comfortable and steady, with the wheels and fork providing some flex over rougher roads. It may not be the smallest and most compact foldable, but the HS-F6 makes up for it with a durable and simple design that is unlikely to fail on the road. In short, the HS-F6 is a winning candidate for those who want to go green and ride but do not have the space in their home for a road bike. 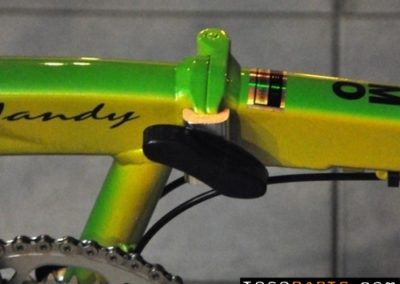 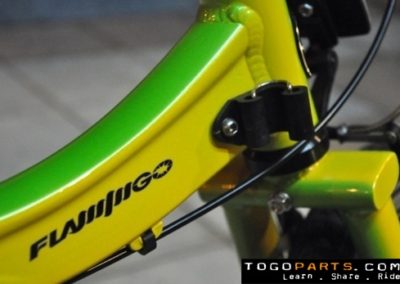 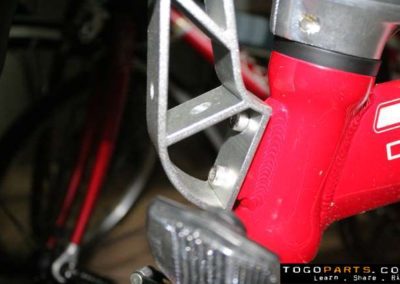 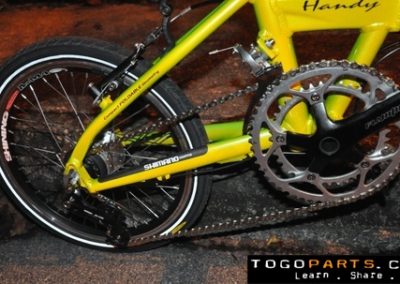 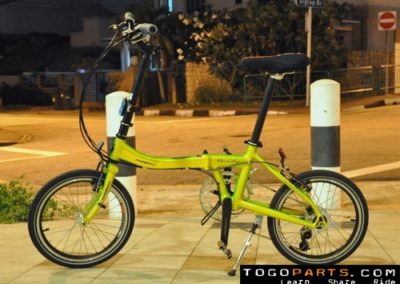 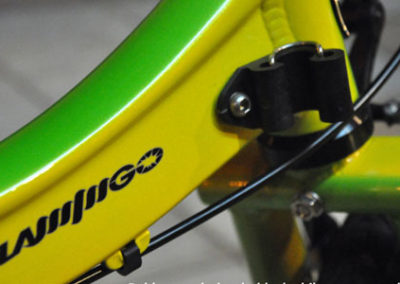 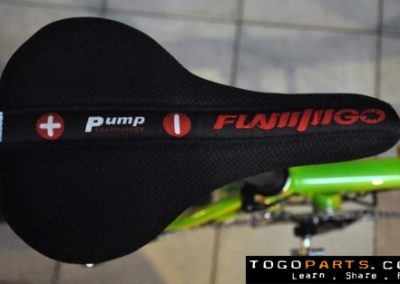 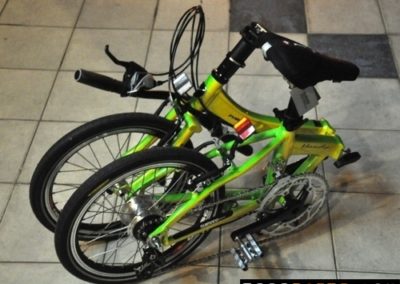 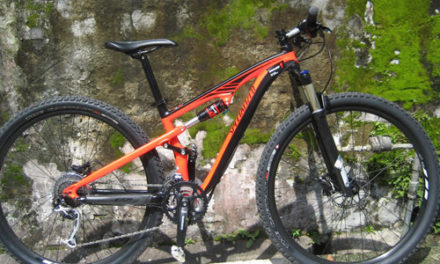 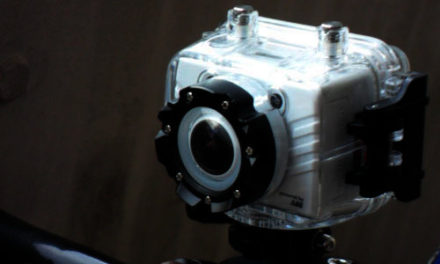 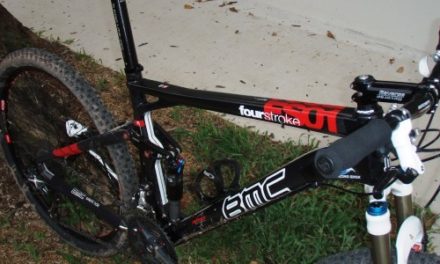