For anyone who enjoys mountain biking, the latest carbon fibre framed off road bikes with complicated looking and expertly designed rear suspension linkages and swingarms, coupled with equally impressive front suspension forks and gearing componentry that puts a Formula 1 car to shame is usually an eye turner wherever the bike goes, and regardless of the type of terrain that it gets put through, even if the bike never truly gets ridden to even half of what it’s capable of handling, some cyclists still have the mentality that if they have a more expensive and higher performance bike under their feet, that they are able to ride faster, better and harder than others.  But a real rider can take any bike and turn it into a dynamite racing machine, even if it’s a plain and simple hardtail bike with only a front suspension fork, because sometimes, lesser is actually better.  In the case of off road riding, having a rear suspension robs the rider of a bit of power that actually gets transferred to the rear wheel, due to the slight absorption from the rear shock absorber, although the ride may feel smoother and more capable, nothing beats the pure power transfer efficiency of a hardtailed mountain bike.

Designed for all mountain and soft enduro riding, the Dartmoor Primal is a versatile enough to suit the majority of riding styles, so whether you plan to charge up steep hills followed immediately by crazy high speed downhill sprints, or prefer riding on hard terrain or simply enjoy long distance offroad rides, the Primal was designed to handle all of these types of terrain and riding styles.  Termed “The fastest Enduro Hardtail” because of its win at the Polish National Enduro Trophy Series in 2014, this 6061 aluminum framed bike craves to be trashed around on single tracks and the 27.5″  wheels further ensure that nothing gets in the way of this exceptional bike.  The 67 degree headtube angle keeps downhill runs very stable while the 71 degree seattube angle means that this bike is equally adept during climbs as well.

The Dartmoor Primal comes in three frame sizes, small, medium and large, enough to fit almost any rider’s body size and riding style and has a solid and strong Suntour XCR-32 Lo-Coil fork up front, which has 100mm of travel.  Gearing comes standard from SRAM with X4 front and rear derailleurs, 8 speeds for the rear and double in the front, the crank is a Samox 32-22T and matched with a SRAM PG-820 cassette with 11-32T sized gears.  Braking is done with Promax mechanical disc calipers biting on 160mm rotors which are mounted on 9mm QR front hubs and 135mmx10mm rears, with Shining DB-28 27.5″ wheels that are wrapped with Kenda Honey Badger Sport 27.5×2.2 rubbers.  Contact points are Dartmoor’s very own equipment, such as the Candy pedals, Trail 50mm stem, Tornado 750mm long handlebars, Maze grips and a Trail saddle.

This bike truly rides well offroad, I’m used to riding my full sus bike offroad so when I did a test ride with the Primal, I was pleasantly amazed at the ease at which I could ride uphill, also with less effort as compared to my own bike, I was confident that every inch of pedal stroke would equate to some movement at the rear wheel, and no matter how much (or little) power I applied to the crank, I knew that this bike would not disappoint me, and it lived up to my expectations and it didn’t disappoint me one single bit, well except that if I had fallen and nicked the beautiful holographic paintjob on the frame.  The lack of a rear suspension meant that uneven terrain would be slightly less comfortable and stable, but the decent front suspension fork ensured that steering and tracking was accurate enough to make the bike move in any heading that you wish.  The integrated tapered headset is also an added bonus in the event if you ever wish to change forks in the future, like sort of an insurance policy to ensure that you will enjoy your Primal frame for many years to come. 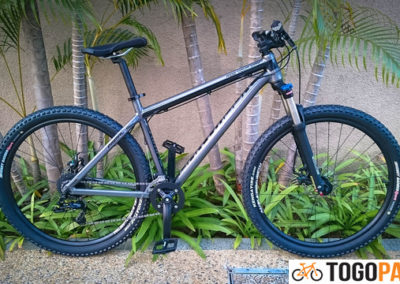 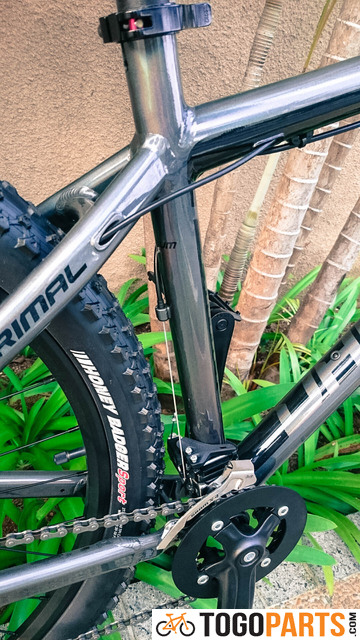 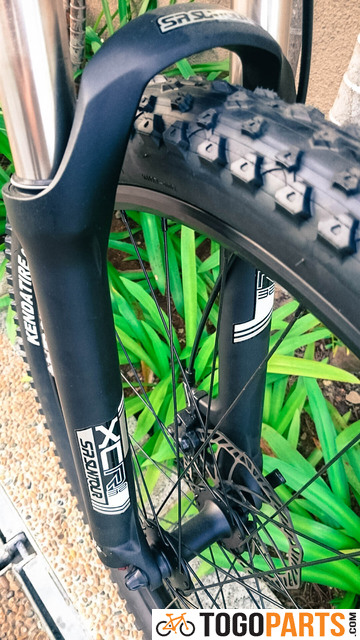 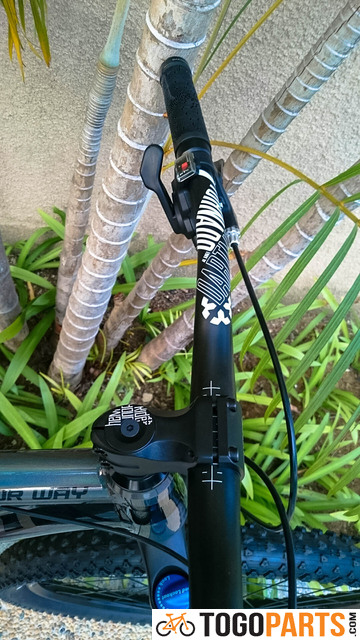 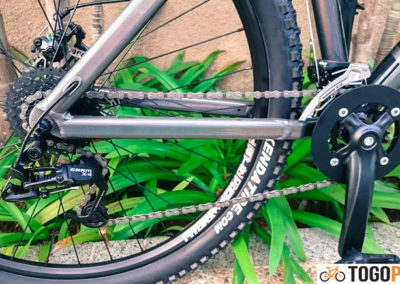 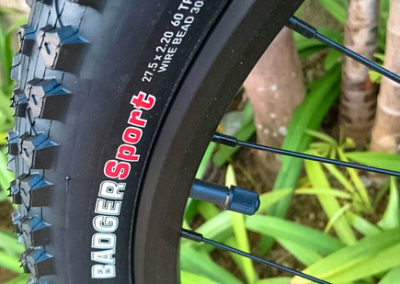 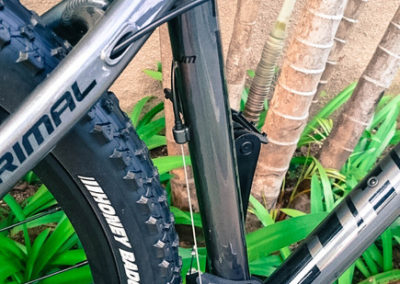 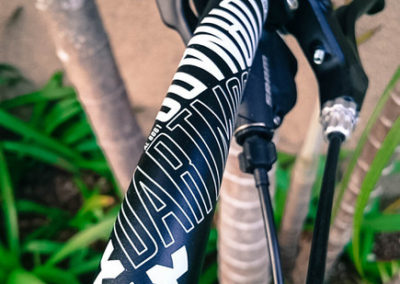 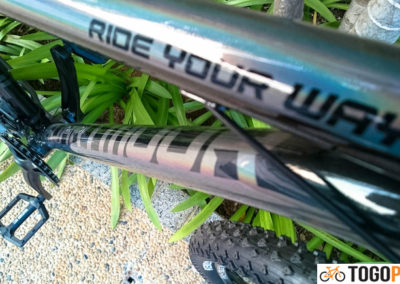 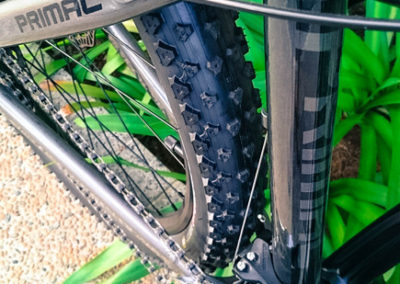 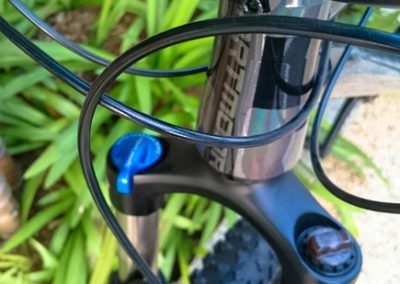 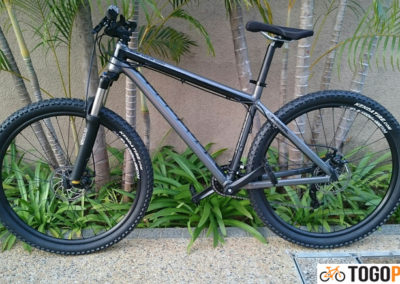 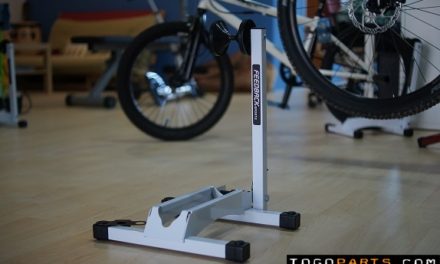 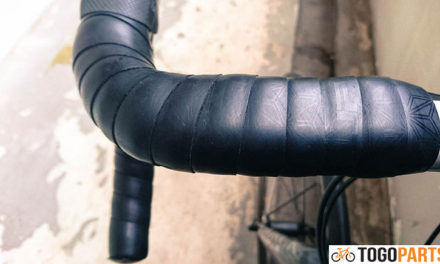 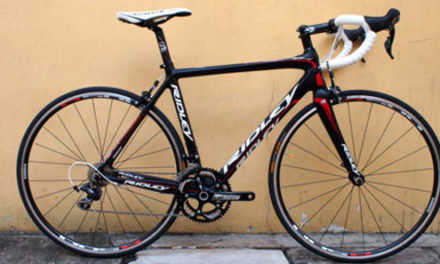 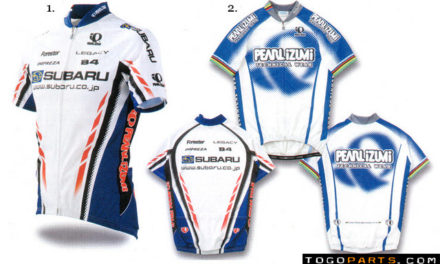