Friedrichshafen, Germany – Wide, wider, widest: Is this the trend that will shape bikes in 2017? Plus sizes, not just in tires but also for other bike components, are already in style this year in the biking scene. But apparently it just won’t be enough width. Working towards an unprecedented 36 gears may be part of the craze. In any case, bike experts are already certain that the 12th sprocket is on the way. Whether they’re right will become apparent at the next Eurobike, from August 31 to September 04, 2016.

The appearance of tires in the new 27.5+ size already drew lots of attention at the Eurobike 2015 exhibition. This size describes mountain bike tires that are somewhat larger in diameter than the usual 26” ones and, with widths of 70 to 75 mm (2-3/4” to 3”), considerably wider as well – but that are still narrower than fatbike tires, which start at 100 mm (4”).

And recently, the American tire manufacturer WTB unveiled to the cameras of the industry press a new class of racing tires that are all of 47 mm (1.85”) wide – a format otherwise seen on the road only on comfortable city bikes! The new size was christened road plus.

Of course it caused a fair few raised eyebrows among experts, but with WTB being the very same company that originally proposed the 27.5+ tires mentioned above, road plus is under serious consideration in the scene nevertheless. When it comes to tire widths, the American company seems to have a nose for potential trends.

The new super-wide racing tires will nevertheless fit on some standard racing bike frames, according to WTB. This can be accomplished by reducing the diameter of the tires and mounting them on wheels of the 27.5” size for mountain bikes. But the design restricts the selection of braking systems for such racing wheels to disk brakes only.

The lively discussion in the bike market of more width is not limited to the topic of tires, however. This year already, the so-called Boost standard brought wider hubs and bottom brackets to the mountain bike segment. Component manufacturers are already deep in discussions about using the extra room to introduce a twelfth sprocket for chain shifting systems. For the mountain bike of the future, this means that even with a lean single chainwheel in front, it would still have an imposing range of 12 different gears. And with a chainwheel or two in front, this would mean 24 or even a whopping 36 gears!

But then, the German-American component manufacturer Sram just posted to Youtube a eulogy for the front derailleur for mountain bikes (httpss://www.youtube.com/watch?v=PmRgGaWE5c4). In other words, future shifting systems from Sram will be built on single-chainwheel solutions.

One way or another, bike experts agree: the twelfth sprocket is coming. Whether they’re right will become apparent at the next Eurobike, from August 31 to September 04, 2016. Further information at www.eurobike-show.de.

Tire sizes seen otherwise only on comfy city bikes are soon to make an appearance on racing bikes, too Photo credit: WTB

Cassettes with 12 gears are currently available only as tuning accessories, such as this one from the Taiwanese company Chosen. But market observers expect that the big component manufacturers will be jumping on the bandwagon in the coming model year. Photo credit: Laurens van Rooijen

Press Release: The Mountain Bike of the Future – EuroBike 2016 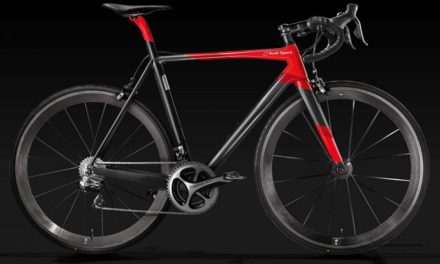