Rides - See who's riding what 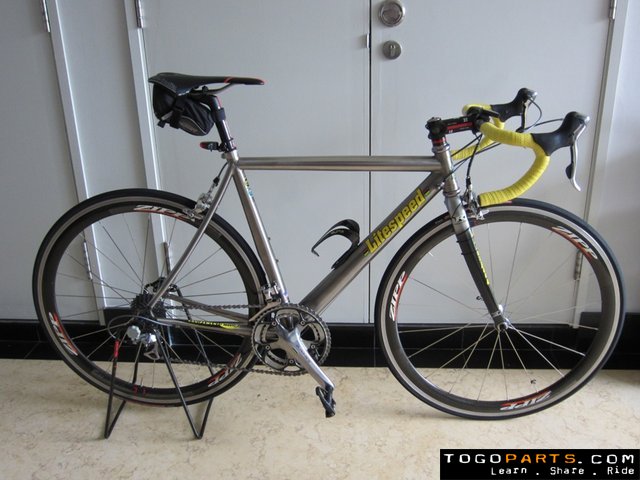 
A frame (size : 51 cm) built for sprints but it feels relaxed enough for climbing Genting Highlands too.

I heard comments about titanium being too flexy but with the 6/4 Al/V oversized and aero downtube, I have not yet experienced that 'wet spaghetti' feel (even after riding this bike for 6 years!).  Even while climbing out of the saddle or sprinting, the front derailleur did not rub the chain.

At first, riding titanium after having ridden only chromoly and aluminium, feels like there is alot of power being sucked into those titanium tubes somewhere and you get the feeling that you are losing power....Well, that is the characteristics of titanium - it absorbs the micro-vibrations from the road so well that you do not get the same road response giving you the sensation of speed.  But actually you are going just as fast as before!

The beauty of titanium is that your bike will last a pretty long time! This pic shows my bike frame's condition after 6 years of riding and racing in all kinds of conditions.

I upgraded to the Dura Ace 10 speed (two years ago) which is as expected - flawless.  I bought the Mavic Cosmic Carbone SL second hand (one year ago)and have found them to be flawless also!  I  used the Ksyrium SL before and these carbon wheels (although its really a carbon fairing over an alu clincher rim) are a natural progression... pack riding at 40kmh and above is easier than with the Ksyriums!

The Cosmic wheels are also quite robust - I smacked into the rear of a Nissan Sunny bcos the driver decided to do a 3 lane switch to get into a carpark.... I had by then slowed down to about 30kmh but still thought that was the end of my front wheel.  Well, after checking and rechecking - the wheel was still true and undamaged!  Mavic has my vote for making the toughest wheelsets!