Full suspension frames have come a long way since inception about 14 years ago. Initial incarnation of these frames saw only modest travel of an inch or so. Since then, more travel has been packed into the rear end at a rate close to an inch per year. Not only have their travel been increased, rear suspension designs have been fine-tuned to be much more efficient. They are now a common sight at podium finishes even for cross country races. There are two contributing factors that drive this success. The first obvious reason is of course the advancement in the rear suspension design. The second contributing factor to the efficiency in the rear is brought about be the innovations in the rear shocks.

Fox Racing Shox is a company that needs little introduction. It has been in the suspension business for 30 years, building shocks for the motorcycle industry initially. It started building its first bicycle shock for Cannondale in 1993 and has dominated the bicycle rear shock market ever since.

Having ridden the RP3 for close to a year now, the main whine I have for the shock is its indistinctive platform lever position. The lever seems to have a mind of its own and tends to jump between the on and off position. Another gripe is the low platform threshold. Even at the hard setting, bobbing can still be felt under hard cranking or during out-of-saddle efforts. Up till now, most cyclists would have come to terms that no platform system can totally cancel out bobbing during out-of-saddle efforts and are appreciative of RP3’s capability in reducing it in such situations. But all these are about to change with the new RP23.

The stable platform threshold is significantly higher than the old RP3 when it is set in the “2” and “3” position. The threshold in “3” is so high that out-of-saddle cranking can be done without the rider feeling the bobbing effect. However, at this setting, the small to medium bump sensitivity of the shock is also greatly affected. During the whole review period, I was happy to set the stable platform at its lowest setting. Occasionally, I would change to the medium setting if I know that the ride will be mainly on the road. The lever adjustment between the on and off position is also more distinctive where a solid click can be heard when switching between the second position. “Ghost shifting” is non-existence with the RP23.

While improving the tuning range and threshold of the stable platform, Fox did not leave out the rebound damper. The RP3 received complaints that the rebound was too slow (even when set to fastest) when pumped up to pressures under 150 psi. The new shock sport a wider rebound damping range to ensure the shock’s versatility in its different application, from XC racing to All Mountain riding.

The final sweetener to the whole deal is of course its high strength to weight ratio. This featherweight air shock weighs only 213 grams, but is durable enough to be retrofitted onto trail bikes with 5 inches or more of travel.

The RP23 packed significant improvements over the RP3. It is much more versatile in its tuning to suit each rider’s individual style. This is one shock that allows you to tune your ride from plush to efficient, and back to plush in less than 5 seconds. Like the rear to be bob-free when riding to the trail? Just set your stable platform to the highest and flick the lever to on. Switch it off the moment you reach the trails.

I like the wide adjustment range, and love the fact that it is so easy to tune. All I need to do is to play with the positive air pressure to get the right sag, thereafter, click through the rebound damper range to select the rebound rate that suit my riding and I am done. No fiddling with negative chamber and compression damper.

If your current ride is suffering from poor suspension design and is experiencing fromannoying bobbing when you ride, then upgrading your rear shock might be a solution if you are not prepared to change the frame. Get the RP23 and you will get to experience how efficient and fun full suspension frames can be at the same time. 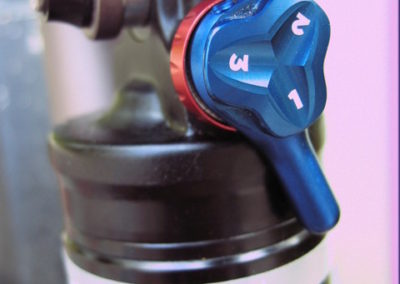 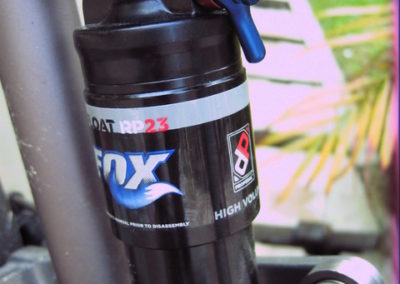 This could be your future bike helmet