After 2015’s 7 Days in Hell, which looked at the legendary (fictional) finale of Wimbledon 1996, Andy Samberg and Murray Miller’s HBO follow-up mockumentary Tour de Pharmacy travels back even further in time and looks at the (fictional) 1982 Tour de France, in which “virtually every rider in the race was doping.”

Disclaimer: Film is for mature audiences only.

Through the perspective of five riders, mockumentary Tour de Pharmacy gives an inside look into the grim realities of the darkest event in a sport notoriously tainted by controversy over a veil of mirth riddled with nefarious characters, though below a veil of mirth portrayed cartoonish characters; it was never going to be taken seriously. Imagine John Cena and Dolph Lundgren playing steroid-filled cyclists, and Freddie Highmore as a lady disguised as a male cyclist; that year’s competition was a hornet’s nest of moral depravity.

The ludicrous plot is littered with “archival footage”, where the interviewees are asked for their accounts of the race. The casting choices for the older versions of these characters are so good that they immediately draw a laugh at first glance, but they’re each highly entertaining. A standout is James Marsden, playing an on-the-ground BBC race reporter, sporting a brilliant British accent; but there is, however, real-life sportscaster Joe Buck involved to give it some real-world feel.

Arguably the only controversy of the film is the inclusion of “unidentified doping expert” Lance Armstrong. His segments are very funny, with the increasingly incompetent and absurd attempts by the crew to obscure his identity and protect him from litigation. And Armstrong probably deserves credit for poking fun at himself and his infamous place in cycling history. But is it too early to laugh at a man who has lied to his fans and bullied (with financially crippling lawsuits) those that tried to blow the whistle on him and his team’s drug operations? That may be taking things too seriously for a film that made to laugh at itself.

Tour de Pharmacy might suffer a bit from having a large, star-filled cast with some stellar – not to mention surprising – names in the cast including Jeff Goldblum, Orlando Bloom, Danny Glover, Dolph Lundgren, Kevin Bacon, Mike Tyson, and JJ Abrams. Each may need just a moment more to shine in this 40-minute mockumentary, where the jokes keep moving with nothing extraneous or obligatory. The regular, and surprisingly graphic dick humour alone could slap you into paying attention to the smart comedy that’s been created here.

Bike Stop – Up and Coming Bikeshop 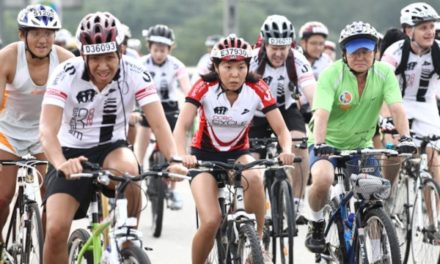