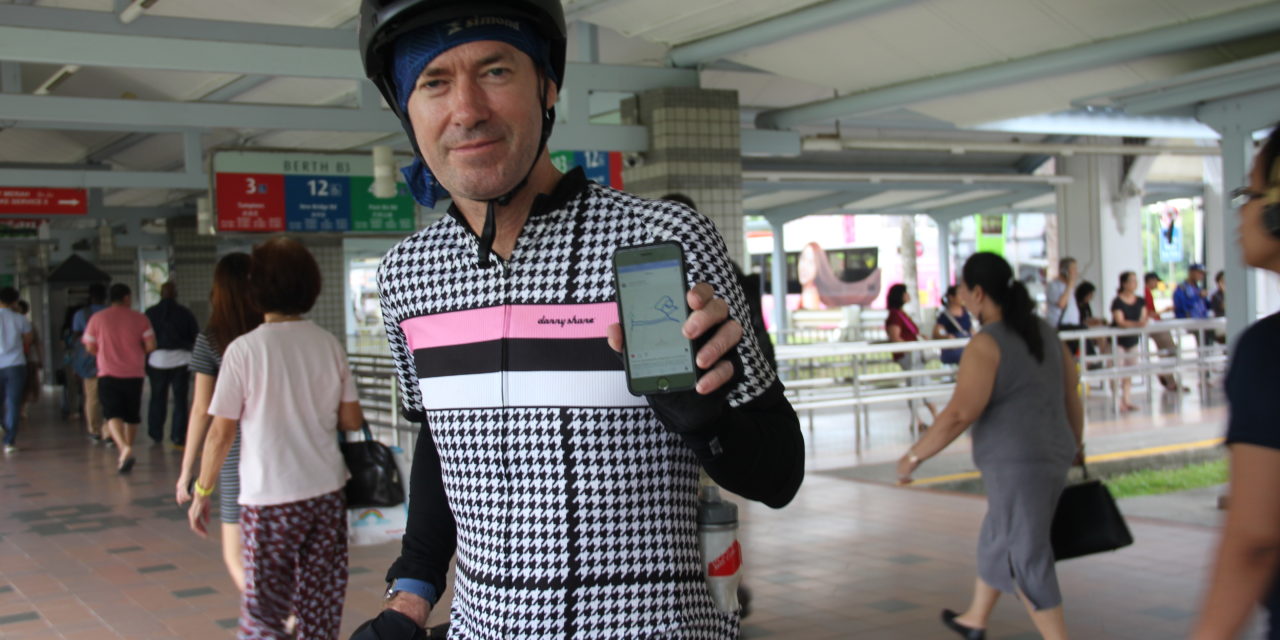 Mr Stephen Moore has a few titles strapped to his name.

First, he’s known to the cycling fraternity as the 8th Male Elite Finisher of the recent #TOGO817 km challenge, organized by Togoparts that ended on 9 Sept 2017. It took him 3 tries over previous challenges to achieve this record.

His second achievement is the “Artist” title in the same #TOGO817, and previously #TOGO517 for his most creative Strava art route mapped out on a GPS route planner.

Third achievement, he’s probably the one and only guy who’s able to claim bragging rights for cycling around the whole of Singapore – doing it for his Strava art.

The Straits Times did an interview with the Brompton Kiwi (Stephen’s nickname for himself in reference to the fruit of his native New Zealand).

Stephen Moore aka Brompton Kiwi with his favorite “unaltered” blue Brompton Bike out of the 3 he owns.

Since his coming to Singapore in 2009, the 51 year-old has made it a point to travel the island only on his signature blue Brompton folding bike. Indeed, he’s rarely seen without it, and the Brompton brand probably became synonymous with the time-honored name of Moore. The Brompton Kiwi (as he calls himself) made a rule with himself: never to use public transport unless it was raining, or an emergency.

Since then till 2014, Stephen cycled wherever he went, finally making it a point to complete his round-Singapore-trip as a way to both explore the island and celebrate SG50. What sounded arduous was the fact that whenever he missed a road – as he sometimes did – he would make himself ride back to the area and complete it. Quite a few times, the discovery was made only once he’d reached home. Regardless, Stephen would cycle back the long way to finish that one missed road.

He completed his quest in September 2016 covering about 11,000km in total.

He is also part of Team Spin Doctor, the cycling group that fellow #TOGO817 6th Elite Finisher John Koo participates in to cheer one another on.

As a rule of thumb, the veteran cyclist combines the art of Strava with cycling – first mapping out his route on the Strava GPS route planner, then taking the route. For those who’re not in the know, Strava is art is the art of making pictures out of your cycling routes. When he first began to use Strava, Stephen did not realize the potential of the GPS-to-map device. It was only after close scrutiny of past trips and consultations with other Strava practitioners did he begin to see the art: leaving out a line here, or deliberately cycling on additional borders to draw in more lines and complete a Strava picture.

Holding up a picture of a dog, Stephen proudly showed me his winning entry for #TOGO517:

Stephen was trying to locate Sengkang – and discovered that the route he had taken looked like a dog with a chef’s chiffon. He submitted it for #TOGO517 and won the “Artist” award there.

Next, he recounted the story of his winning entry for #TOGO817 (also a dog), affectionately named the “Sausage Dog”. The Dog came into being while he was cycling around Upper Serangoon- Upper Aljunied Road. By leaving out a line/road here and there, he was able to trace out a thin, sausage-shaped puppy something like this: 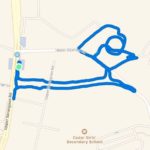 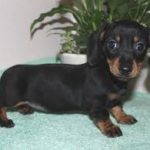 See how it compares with a “sausage dog”?

Stephen was trying to locate Sengkang – and discovered that the route he had taken looked like a dog with a chef’s chiffon. He submitted it for #TOGO517 and won the “Artist” award there.

My personal favorite of Moore’s Strava art is this red bull/wild boar. He had to specially cycle round-and-round to draw in the eye, so he recounted.

Other art that Stephen has drawn are a pair of sunglasses, formulated around the Marina Bay area. Another noteworthy one is of a rat, created when he rode around Tokyo’s Musashi-Koyama area. Inverted, it looks like a falling Ultraman.

Inverted, the field mouse looks like a falling Ultraman.

Apart from Kim Wong, another female #Togo challenger, Stephen Moore is the only challenger to have completed #TOGO817 on a folding bike. 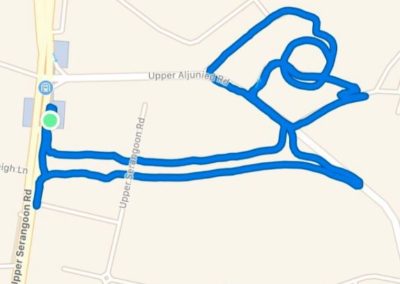 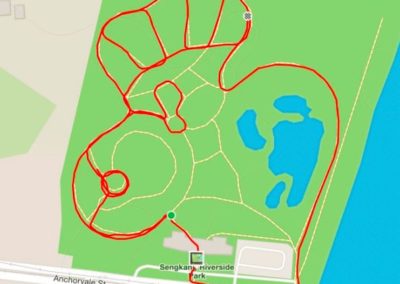 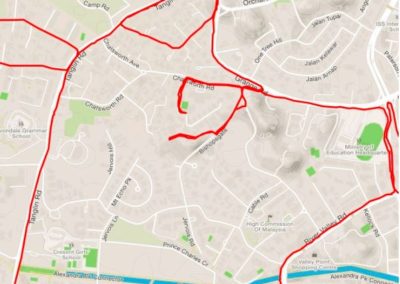 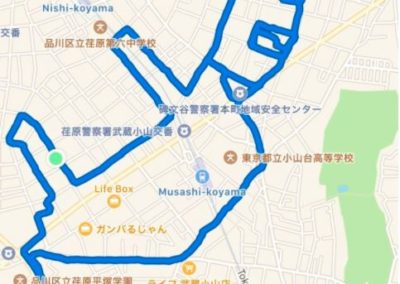 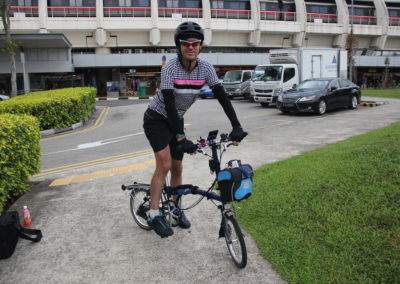 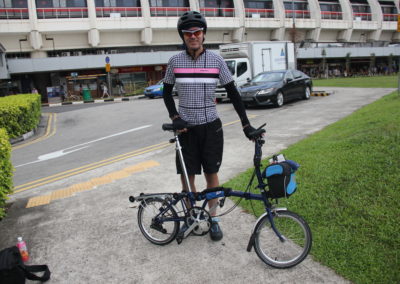 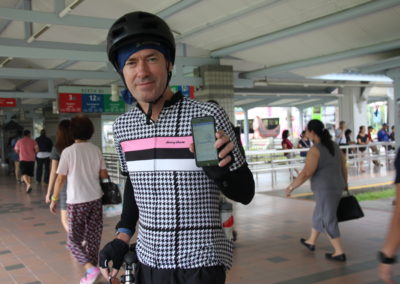 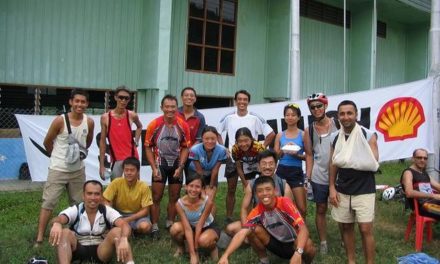 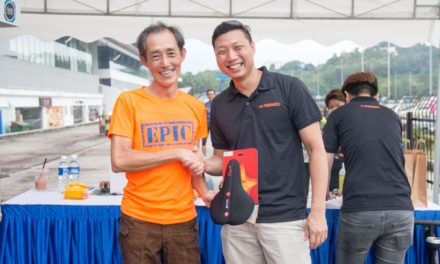 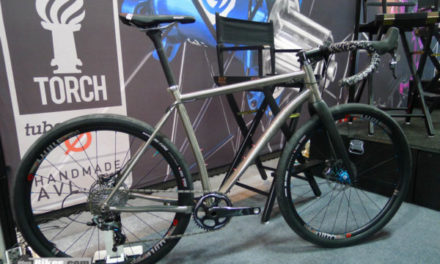