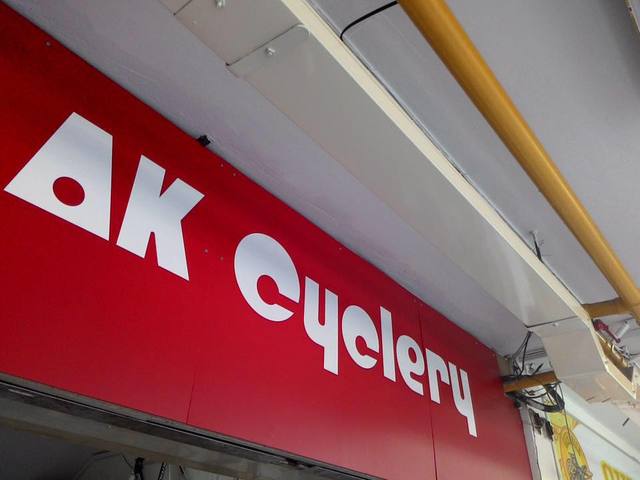 Get directions to AK Cyclery

Iâm sorry you had a bad experience with your bicycle purchase.
Unfortunately, you had some demands which I am not prepared to accommodate.
Nevertheless, I would to remind you that the 1 month warranty that is provided with your bicycle purchase will be expiring in about a weekâs time. If the bicycle or any of the parts is indeed faulty, we will assist you to replace the faulty item without any charge. You can bring back the bicycle to the shop for this service. If you have difficulty bringing the bicycle back, you can opt for our transport service for a nominal fee of $15. This fee cannot be waived as there are costs like fuel costs and parking charges that will be incurred in extending the free service mentioned above.

The owner and the mechanic delivered the bike at 9:30pm at our block. We briefly inspected the bike. The mechanic explained the gear mechanism to us. They also handed us the pair of lights. The lights had no batteries, so we couldnât test them. We paid the balance and they left.

But until next afternoon, we didnât hear back from her. Then I called her. Her tone was completely different (quite harsh) this time. She said the bike was in good condition when they delivered, and put the blame back on us for not handling it properly. I said if the bike is not able to last for even 1 hour of ride, then the quality is really questionable. She said "if you want better quality you have to buy a more expensive bike".

She offered a Laux bike for a top-up of $50 and sent me a few pictures. We didnât like that bike and I also didnât want to give another $50 to this owner, who was extremely rude and discourteous by now. I told her that I do not want to fork out more money and checked if a refund is possible. Initially she refused, but then said if I want a refund, she would refund only $130 i.e. I'd forego $59 for no fault of mine. While I was negotiating with her, she hung up the phone. I tried calling back but she didnât answer. So I sent her a message that I would like to get the bike repaired or replaced. She didnât respond to my message at all.

I called up a few times the next day (today) but each time the mechanic answered the calls and gave some excuses for Madam's unavailability. Finally I got a message from Madam that they would repair the bike provided I pay $15 transportation. I said Iâm not willing to pay any transportation since the bike was faulty from Day 1. While I was trying to explain to her that it was a "lemon" product and not my fault, she hung up the phone on me (for the second time). I felt humiliated and shocked!

I tried calling back but she didnât answer. It was clear that she wouldnât take my calls. So, I sent her another message and let her know of my intentions to invoke the Singapore "Lemon Law" and file a complaint with CASE (Consumers Association of Singapore). Iâm yet to hear back from her.

Iâll update this story as it unfolds.

Login to togoparts.com to use all the facilities!

Still have trouble logging in? Get Help.